I included the above story because GMAT students often struggle to solve certain math questions while surrounded by metaphorical pine trees. In fact, . . .

Students often get GMAT math questions wrong NOT because they lack the skills to solve them, but because they don’t understand what the GMAT is testing.

Consider, for example, one of my favorite questions from the GMAT Official Guide:

Set your timer and try solving the question before continuing.

On GMAT Club, 27% of students get this question wrong, and those who get it right take, on average, 2.5 minutes doing so.

In reality, no MBA aspirant should get this question wrong, and no one should spend more than 30 seconds solving it (I’ll explain why shortly).

The problem with this approach is that there are three significant differences between high school math questions and GMAT math questions:

Despite these differences, most students insist on using conventional high school math strategies for every GMAT question they encounter and, as such, fail to maximize their quant score.

Notice that this approach completely ignores the fact that the question is accompanied by five answer choices, and one of those answer choices is the correct answer. Ignoring this feature is a missed opportunity.

GMAT-specific strategies take advantage of the five answer choices. So, after reading any GMAT Problem Solving question, we should immediately ask, “Can I use the answer choices to my advantage?”

For the towel question, the answer is a resounding yes!, since we can just test each answer choice until we locate the one that satisfies the given information.

That said, for this particular question, I’d start testing the answer choices immediately, since they all work so nicely with $120.

As you’ll see in my next article, I’d typically start with answer choice C, since we can often eliminate answer choices based on the results of testing the middle value. So, if I had started with choice C, I would have found the correct answer in 10 seconds.

Why do so many students immediately choose the slower (and more problematic) algebraic approach to solve this question?

For some students, the response is simply an academic reflex after years and years of non-multiple-choice math tests created by math teachers who insisted they use algebra and show all of their work. In other words, hundreds of high school math tests and homework assignments have conditioned students to respond this way.

Other students misinterpret what the towel question is actually testing. They assume that, since it closely resembles the questions they answered while studying algebra in school, the question must be testing their ability to turn the given information into an algebraic equation and then solve that equation.

This question isn’t designed to test any of that.

I know this because, IF the test-makers had wanted to test those algebra skills, they would have altered the question to make testing the answer choices next to impossible. Something like this:

The algebraic solution to this altered question is practically identical to the solution for the original question, but now that each answer choice represents a possible sum of two values, it’s virtually impossible to test the answer choices.

Had the test-makers made this slight alteration, students would have been forced to solve the question algebraically, in which case the question would have certainly tested their algebra skills.

Yet, the test-makers didn’t create such a question. Instead, they created one that can be solved by clever adults who are able to create and solve quadratic equations AND by 10-year-olds who know how to divide and subtract.

Because the original towel question was intentionally designed to test your ability to identify the correct answer in the most efficient manner possible. As you can imagine, finding the most efficient solution to a problem is a valuable skill for anyone entering the business world, and it’s the kind of mental flexibility that every GMAT quant question tests.

So, the GMAT isn’t testing my high school math skills?

No, the GMAT tests that too.

A unique feature of most GMAT quant questions is that they can be solved using at least 2 different approaches. So, for each question you encounter, your challenge is to determine the most efficient approach. Sometimes, the most efficient approach requires conventional high school math strategies, and sometimes it requires GMAT-specific strategies. To maximize your score, you must become adept at quickly determining which strategy best suits each question.

So, for the original towel question, testing the answer choices is more efficient than applying conventional high school techniques. For a lot of other questions, high school math is the way to go.

In the meantime, I’ll leave you with four examples of what I’m talking about.

Try solving each question before reviewing the solution.

This question is from the GMAT Official Guide, and GMAT Club’s statistics indicate that 32% get it wrong, and the average solution time is just short of 2 minutes.

A: Yes, I can test the answer choices.

A: Since I can already see that 2 of the answer choices are invalid, I already know I can answer the question by testing exactly one value. So, it’s doubtful the conventional approach (assigning variables, etc.) will be any faster.

Since the income before taxes are paid must be GREATER THAN the income after the taxes are paid, we can automatically eliminate answer choices D and E, since they’re both less than the after-tax net income of $12,000.

From here, I’ll test answer choice B for two reasons:

This question is from one of GMAT Club’s tests, and it has a difficulty rating of 95, the highest rating possible on the site.

A: Yes, I can test for equivalency.

A: Maybe, but I’m confident that testing for equivalency will be fast, so let’s do that.

Key property: If two expressions are equivalent, they must both evaluate to the same number for each value of x.

Now evaluate each answer choice for x = 0 to get: 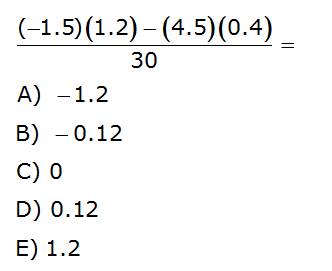 This question from the GMAT Official Guide has a 69% success rate on GMAT Club.

Do these less-than-perfect results stem from students’ inability to perform decimal calculations such as (-1.5)(1.2) and (-3.6) ÷ 30? To a very small extent, yes, but the main reason students get this question wrong is that they believe it’s testing their ability to perform decimal calculations, when it’s actually testing their ability to identify the most efficient approach (and apply a little number sense).

A: The conventional approach is slower and more prone to errors.

Notice that, relatively-speaking, the answer choices are very spread apart (e.g., 1.2 is 900% greater than 0.12), which means I can be quite aggressive with my approximations.

It’s also worth noting that, given how relatively spread apart the answer choices are, we could make some pretty aggressive (even silly) approximations and still reach the same conclusion. For example, if we rounded all the numbers up to the next integer, we’d get [(-2)(2) – (5)(1)]/30, which simplifies to -9/30, which means the correct answer is still B, since it’s the only answer choice between 0 and -1.

Jorge's bank statement showed a balance that was $0.54 greater than what his records showed. He discovered that he had written a check for $x.yz and had recorded it as $x.zy, where each of x, y, and z represents a digit from 0 through 9. Which of the following could be the value of z?

A: There doesn’t seem to be a straightforward way to use the answer choices to my advantage, so I’ll use a conventional approach. Here’s my solution on GMAT Club.

I added that last question to remind you that most questions on the GMAT don’t benefit from using the answer choices to our advantage, but there are still TONS of questions that do.

I’ve been teaching the GMAT long enough to know that many students believe using the answer choices to their advantage is nothing more than a “trick,” and that they won’t need any of those tricks if they learn all of the “conventional” strategies.

This is article #1 in the multi-article series Are you doing it wrong?

As part of your preparation, work on adopting the proper mindset/attitude on test day. This will do wonders for your score.