A common question on the GMAT forums goes something like this:

The quick and easy response is that the GMAT doesn’t work the same way most tests do. With most tests, the more correct responses you get, the greater your score. Not so with the GMAT.

So what determines your score then?

In this article, we’ll examine (and test) the two most popular answers to that question.

Many students believe that question placement plays a significant role in the calculation of their scores, and that the first 10 questions impact their scores much more than the later questions do.

The test-makers (GMAC) say otherwise. In fact, in every GMAT Official Guide (aka OG), you’ll find the following statement: 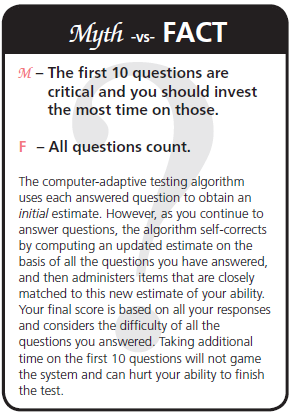 So, rather than examine extreme scenarios, I tested a much more realistic scenario. I completed the Quantitative section of the official GMATPrep test #2 five times and intentionally got the same 11 questions wrong each time.

Given the placement of my 11 incorrect responses and the fact that I correctly answered only 6 of the first 10 questions, you might be surprised to learn that I received a Quantitative score of 49 (74th percentile), which is the third highest score possible.

You might also be surprised to learn that I didn’t get the same quant score for all five tests even though I incorrectly answered the exact same 11 question placements each time.

Given the huge range of scores, I think it’s safe to say that, if question placement plays a role in your score, that role isn’t very significant.

This brings me to…

Note: At the end of the article, I discuss the limitations of using GMAT Club's difficulty ratings as well as other factors that could affect the results of these experiments.

Below are the results of the five practice tests with the difficulty ratings included: 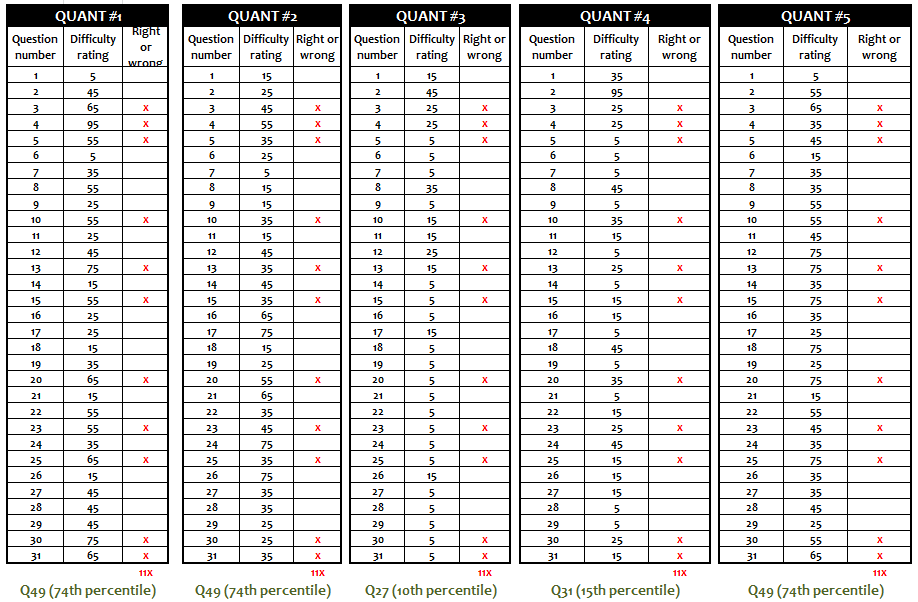 For test #1, you can see that getting only the difficult questions wrong resulted in a solid Quant score of 49. The same can be said about tests #2 and 5, in which most of the incorrect responses were for difficult questions. Conversely, for tests #3 and 4, many of the questions I got wrong were easy or medium questions, and the scoring algorithm seems to have punished me for that.

So, it seems that getting a few easy questions wrong (regardless of their location in the test) causes the scoring algorithm to quickly reduce the difficulty level of the questions you see, and this reduces your chances of a decent score.

It’s worth noting that I also completed one Verbal section using the same strategy I employed for the first Quantitative test. That is, I found each question on GMAT Club, noted its difficulty rating, and intentionally answered all difficult questions incorrectly.

Note: On GMAT Club, Reading Comprehension (RC) questions aren’t assigned difficulty ratings from 5 to 95. So, for RC questions, I noted the percentage of correct responses for each question and then incorrectly answered the difficult questions that had low success rates.

Here are the results of this experiment: 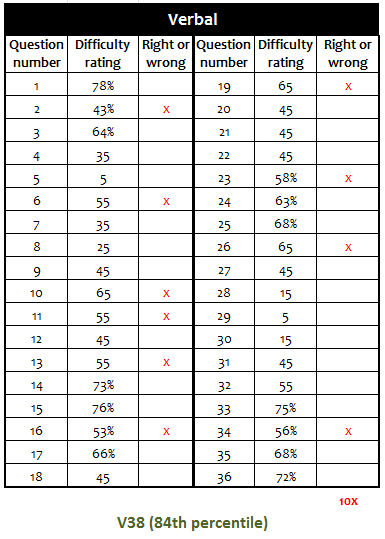 As you can see, the Verbal results were similar to the Quantitative result. In this case, I got 10 questions wrong, which resulted in a Verbal score of V38 (84th percentile).

When we combine these Verbal results with the Quantitative results from Test #1, we get a total score of 710 (91st percentile), which isn’t bad considering I got 21 questions wrong.

Given the results of these experiments, I offer three theories regarding the GMAT’s scoring algorithm:

If the above theories are correct, then the following strategies should help you maximize your score on test day.

Since it appears the scoring algorithm significantly penalizes you for getting easier questions wrong, it’s crucial that you give yourself enough time to answer every question on the test. Failing to do so will likely force you to guess on the last few questions, and if those questions include some easy ones, your score will suffer.

To help you stay on track and have sufficient time to answer every question, check out our GMAT time management video. It recommends using a milestone chart to ensure you have enough time throughout the test.

Believe it or not, spending extra time on the first 10 Quantitative questions probably won’t help you answer more of those questions correctly.

In 2003, the Educational Testing Service (ETS) conducted a study in which a large sample of students took the Graduate Records Exam (GRE) under regular time constraints, and another sample of students were given 50% more time to complete the same test. The students under regular time constraints had an average Quantitative score of 664 (at the time, GRE test-takers received a Quantitative score from 200 to 800, and a Verbal score from 200 to 800).  The students who received 50% more time had an average Quantitative score of 671, a measly 7-point increase.

Give yourself permission to guess and move on

As I noted earlier, getting difficult questions wrong doesn’t seem to significantly decrease your score, whereas getting easy questions wrong seems to have a greater impact. So, if you’re struggling with a particular question, it’s quite possible that the question is beyond your skill level, which means getting it wrong may not significantly decrease your score. Also remember that getting away from difficult questions will free up time later on, which you can devote to questions you can answer.

If getting easy questions wrong significantly hurts your score, try to eliminate all silly mistakes. Yes, I know that’s much easier said than done, but if you’re someone who’s prone to making silly mistakes on the Quantitative section (like me), you might benefit from the Read-Solve-Read-Submit strategy. With this strategy, you solve each question as you normally would, but then you reread the question before entering your response. You’ll find that, once you’ve solved the question, key information (e.g., x is a positive even integer) will often stand out if you missed that information during your first reading of the question.

Limitations of the experiments

Without having access to the GMAT scoring algorithm, no one can be 100% certain about how it works. So there’s that.

Also, some of the theories presented here rely on the difficulty ratings GMAT Club’s algorithm has assigned the test questions, and there’s no reason to believe that GMAT Club’s difficulty ratings perfectly match those of the official test-maker. Keep in mind that the questions on the GMATPrep practice tests were once official questions on the real test, so the test-makers have A LOT of data to back up their ratings. More importantly, the official ratings are based on the efforts of students who had fully prepared for the test, whereas the students on GMAT Club are still preparing. So, it’s quite possible that GMAT Club’s difficulty algorithm ranks some questions higher than they really are.

Having said all of this, it’s worth noting that most of the GMATPrep questions posted on GMAT Club have been answered over 500 times, so that should at least provide some information about the relative difficulties of the questions, and for the experiments described here, relative difficulties should be enough to help identify the hard and easy questions.

For the most part, the results of these experiments simply serve to reinforce certain strategies that have always existed for the GMAT:

Note: I wish express my sincere gratitude to Ian Stewart who knows a lot more than I do about the GMAT scoring algorithm and who shared with me many of the findings in this article, including the study regarding the limited score improvement experienced by GRE test-takers given 50% more time.

Use the answer choices

Each time you read a Problem Solving question, don't forget to ask, "Can I use the answer choices to my advantage?"

While practicing Quantitative topics, be sure to practice with both official and unofficial questions.